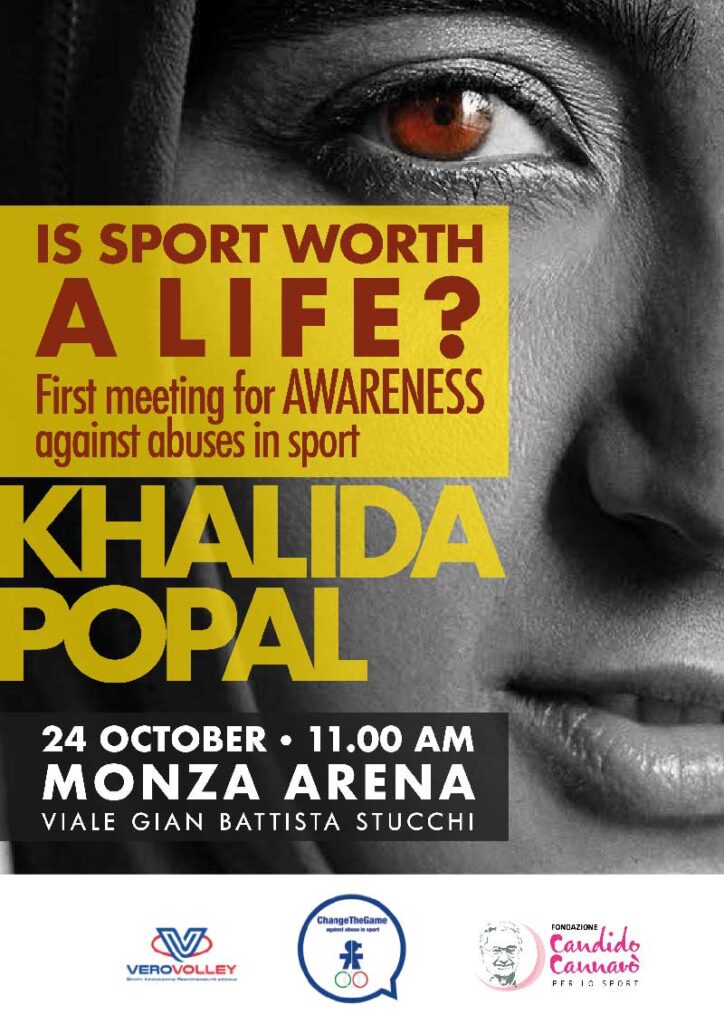 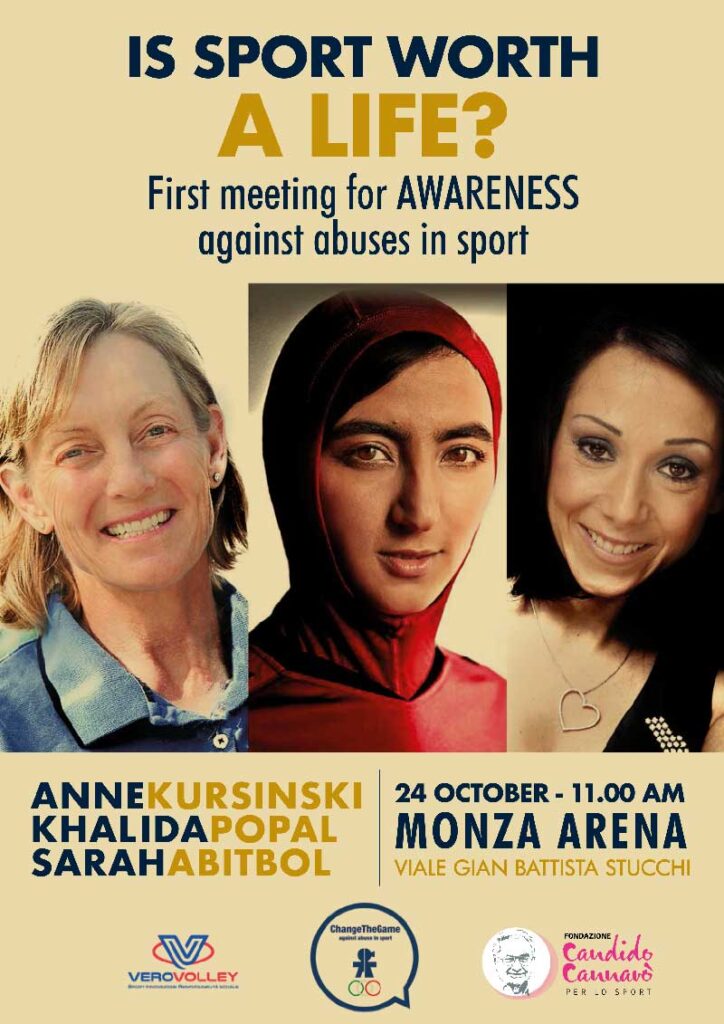 14% of athletes younger than 18 has been a victim of sexual violence. This is the conclusion of a study carried out in Belgium and in the Netherlands by the Antwerp University, and it measures the impact and the numbers of abuses against young people in the sport world. This is a reality existing in Italy, too: for this reason, the association ChangeTheGame sheds a light on this phenomenon.

“IS SPORT WORTH A LIFE?” , is the title of the first meeting in Italy for the awareness to fight against sexual violence and abuses on minors in sport, which is taking place on 24th October at 11 am at the Monza Arena. The protagonists are three women who changed the world, breaking the silence that too often covers the events of abuses and violence in sport:

SARAH ABITBOL, is the figure ice-skating champion, seven medals at the European championships and a bronze to the world championships; she was abused by her coach when she was 15. An earthquake in the French sport world: only in figure ice skating, 21 coaches and experts have been accused.

ANNE KURSINSKI, is a show jumping champion, five Olympic games, two silver medals. Thank to her courage, Jimmy A. Williams was expelled post-mortem; formerly, he was admitted to the Hall of Fame of American sport.

The stories of these women will be the common thread of the meeting, which will be introduced by Franco Arturi, director of the Fondazione Candido Cannavò per lo sport/Gazzetta dello Sport. There will be other guests and participants like Roberto Samaden, director of the youth sector of F.C. International Milan, Ernesto Caffo, president of Il Telefono Azzurro, Paolo Ferrara, director general of Terre des Hommes Italia, and Marco Chiesara, president of WeWorld.

The presence of the Italian Federation Giuoco Calcio is very relevant: Vito Di Gioia, secretary general of the youth and school sector will talk about the turning point of the Federation, which is going to put in practice the UEFA protocol on the theme safeguarding children policy, adding new policies and tools to protect children.

The organization of this event has been possible thank to the engagement of the Fondazione Candido Cannavò per lo sport and of Alessandra Marzari, president of the Consorzio Vero Volley; the Association will continue the fight against sexual violence and abuses in sport. The aim is to create a big and compact cooperation that can connect associations and sport world to change the rules and build a healthy, safe and protected environment for all children, girls and boys, and athletes.

Alessandra Marzari, president of the Consorzio Vero Volley: presentation of the vademecum ChangeTheGame against sexual abuses in sport.

Franco Arturi, director of the Fondazione Candido Cannavò per lo sport/Gazzetta dello Sport: “The commitment of the foundation is next to those who fight violence and abuses in sport”.

Luca Grion, professor of moral philosophy at the Università degli Studi di Udine: “Ethics in sport. About the educational role of the coach among rhetoric, interests, and idolatry of the victory”.

A STORY. KHALIDA POPAL, former captain of the football female Afghan team: reports, threats and violence. The courage of a woman. FIFA expels the president of the Afghan football federation and suspends three members of the federal board. The birth of a new conscience.

Vito Di Gioia, secretary general of the youth and school sector of FIGC: “The action of the Italian football to protect minors. UEFA protocol, safe guarding policies and instruments put in place by the Italian Federation Giuoco Calcio”.

Paolo Ferrara, director general of Terre des Hommes Italia: “Protecting children in football. The cooperation between UEFA and Terre des Hommes goes through the formation and creation of a safe environment”.

Roberto Samaden, director of the youth sector of F.C. International Milan: “Inter is on the side of girls and boys. Focusing on prevention, growing as people and not only as athletes”.

Paolo Giulini, crclinical criminologist: “My commitment in sport. The leading role of football”.

A STORY. SARAH ABITBOL, figure ice-skating champion, seven medals at the European championships and a bronze to the world championships: un si long silence. The courage to break the silence in the name of justice.

Andrea Marcon, president of FIBS: “The request of criminal records certificates and pending charges certificates to all coaches. The Federation as civil party in the Furgiuele trial”.

Achille Reali, sport lawyer and member of sport justice organs: “The Vismara case. The responsibility of who knew and did not say anything”.

Camilla Beltramini, lawyer of the Udine free-hole, advocate of Maila Andreotti: “The reports kept in the drawer. When testifying is a boomerang”.

Paride Padula, lawyer of the Padua free-hole, advocate of a minor victim of bullying: “The fight against Federugby. The civil trial to establish guilts and responsibilities”.

A STORY. ANNE KURSINSKI, show jumping champion, five Olympic games, two silver medals: the coach and the abuse of the role. The condemnation to the silence in front of fame and glory. The case of Jimmy Williams, from the Hall of Fame of American sport to the post-mortem expulsion. The civil lawsuit against the American equestrian federation begins.

Paola Pendino, magistrate at the Tribunal of Milan: “The coach’s responsibilities in Court of Cassation judgements. The progresses of ordinary justice in listening to the victim of abuses”.

Francesca Garbarino, clinical criminologist: “Victims, a trauma, forever. The perception of the abuse and the psychological support”.

Fabrizio Cacace, sport lawyer and federal prosecutor: “The zeroed victim in sport trial. A justice that needs to be reformed”.

Davide Battistella, FASI president: “Changing the rules to change consciences. My federation at the service of children and women”.